From Citizendium
Jump to navigation Jump to search

Classical plant breeding uses deliberate interbreeding (crossing) of closely or distantly related species to produce new crops with desirable properties. Plants are crossed to introduce traits/genes from a particular variety into a new genetic background. For example, a mildew resistant pea may be crossed with a high-yielding but susceptible pea, the goal of the cross being to introduce mildew resistance without losing the high-yield characteristics. Progeny from the cross would then be crossed with the high-yielding parent to ensure that the progeny were most like the high-yielding parent, (backcrossing), the progeny from that cross would be tested for yield and mildew resistance and high-yielding resistant plants would be further developed. Plants may also be crossed with themselves to produce inbred varieties for breeding. Germplasm resources from genebanks have invaluable for classical breeding.

Classical breeding relies heavily on the naturally occurring plant life-cycle and homologous recombination to generate genetic diversity and to eliminate undesirable traits. It may also makes use of a variety of artificial laboratory procedures to overcome obstacles to introduction of useful traits from wild species that do not usually exchange genes with the domesticated line. These approaches include in vitro techniques such as protoplast fusion, embryo rescue or mutagenisis (see below) to generate genetic alterations and produce transgenic plants that would not exist in nature. 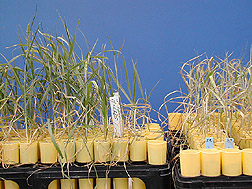 Traits that breeders' have tried to incorporate into crop plants in the last 100 years include:

Intraspecific hybridization within a plant species was demonstrated by Charles Darwin and Gregor Mendel, and was further developed by geneticists and plant breeders. In the early 20th century, plant breeders realized that Mendel's findings on the non-random nature of inheritance could be applied to seedling populations produced through deliberate pollinations to predict the frequencies of different types.

In 1908, George Harrison Shull described heterosis, also known as hybrid vigor. Heterosis describes the tendency of the progeny of a specific cross to outperform both parents. The detection of the usefulness of heterosis for plant breeding has lead to the development of inbred lines that reveal a heterotic yield advantage when they are crossed. Maize was the first species where heterosis was widely used to produce hybrids.

Heterosis made breeders aware of the broad practical value of many genes carried in plant chromosomes even when the identity and trait specified by the particular genes is unknown - that is that diverse plant Germplasm is generally valuable to the breeder.

By the 1920s, statistical methods were developed to analyze gene action and distinguish heritable variation from variation caused by environment. In 1933, another important breeding technique, cytoplasmic male sterility (CMS), developed in maize, was described by Marcus Morton Rhoades. CMS is a maternally inherited trait that makes the plant produce sterile pollen, enabling the production of hybrids and removing the need for detasseling maize plants.

The scientific use of transgenic plants in farming gained impetus in the 1930s when a transgenic wheat variety named Hope bred by E. S. McFadden with a transgene originating in a wild grass saved American wheat growers from devastating stem rust outbreaks.

These early breeding techniques resulted in large yield increase in the United States in the early 20th century. Similar yield increases were not produced elsewhere until after World War II, the Green Revolution increased crop production in the developing world in the 1960s.

Success stories like Hope and hybrid-vigor made it clear that genetic divesity present in wild-species was of great potential value to plant breeders, and eventually lead to the establisment of Germplasm collections consisting of seed-banks devoted to preservation of potentially useful uncharacterised traits for posterity.

When distantly related species are crossed, plant breeders make use of a number of plant tissue culture techniques to produce progeny from other wise fruitless mating. Interspecific and intergeneric hybrids are produced from a cross of related species or genera that do not normally sexually reproduce with each other. These crosses are referred to as Wide crosses. The cereal triticale is a wheat and rye hybrid. The first generation created from the cross was sterile, so the cell division inhibitor colchicine was used to double the number of chromosomes in the cell. Cells with an uneven number of chromosomes are sterile.

Failure to produce a hybrid may be due to pre- or post-fertilization incompatibility. If fertilization is possible between two species or genera, the hybrid embryo may abort before maturation. If this does occur the embryo resulting from an interspecific or intergeneric cross can sometimes be rescued and cultured to produce a whole plant. Such a method is referred to as Embryo Rescue. This technique has been used to produce new rice for Africa, an interspecific cross of Asian rice (Oryza sativa) and African rice (Oryza glaberrima).

Hybrids may also be produced by a technique called protoplast fusion. In this case protoplasts are fused, usually in an electric field. Viable recombinants can be regenerated in culture.

Chemical mutagens like ethane methyl sulfonate (EMS) and dimethyl sulfoxide (DMSO), radiation and transposons are used to generate mutants with desirable traits to be bred with other cultivars. Classical plant breeders also generate genetic diversity within a species by exploiting a process called somaclonal variation, which occurs in plants produced from tissue culture, particularly plants derived from callus. Induced polyploidy, and the addition or removal of chromosomes using a technique called chromosome engineering also found uses.

It should be noted that with classical breeding techniques, the breeder does not know exactly what genes have been introduced to the new cultivars. Some scientists therefore argue that plants produced by classical breeding methods should undergo the same safety testing regime as genetically modified plants. There have been instances where plants bred using classical techniques have been unsuitable for human consumption, for example the poison solanine was accidentally re-introduced into varieties of potato through plant breeding.